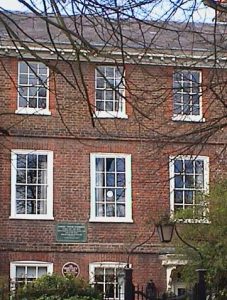 EARLY IN THE morning of July 25, 1834, Samuel Taylor Coleridge, the Sage of Highgate as he was sometimes called, `slipped into the dark’. According to his biographer, Richard Holmes, “he was talking almost up to the end. As he closed those extraordinary eyes… (he said) ..that his mind was clear and `quite unclouded’. Then he added, with growing interest, `I could even be witty…’”

So ended the life of arguably our greatest – some would say our only – poet/philosopher. He died in a second floor room of Number 3 The Grove, a mere stone’s throw from St Michael’s church where briefly he had worshipped, and in whose crypt 127 years later he and other members of his family were to be laid to rest.

He was there at the beginning, too. Roger Sainsbury, in his excellent St Michael’s Highgate, a History pinpoints him at the consecration ceremony on November 8 1832 by the Bishop of London… “Coleridge was present and had a long conversation with the Bishop…” The Bishop, in fact, quoted extensively from STC’s On the Constitution of the Church and State published not long before. He continued to worship at St Michael’s and when he died was buried on the open ground which had been exposed when the chapel of Highgate School was pulled down, between 1829 and 1832. 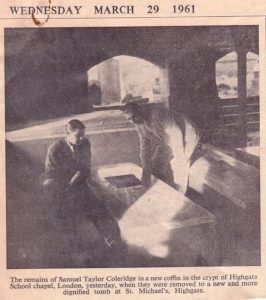 The cemetery attached to the chapel had been the burial ground for the whole village, not just the school, although it ceased taking new interments in the 1960s. The original tomb in which Coleridge and the rest of his family lay is still there to be seen lying where it was first built and is now covered by the new chapel erected in 1866/67. Tellingly, in the 37-odd years between circa 1830 and 1867 it was exposed to the elements.

When the new building was constructed it was built over the tomb where by now the poet and a growing number of his family lay. Ultimately the sarcophagus contained the remains of Samuel, his wife and daughter – both christened Sara – his son-in-law Henry, and their child, his grandson, Hubert. Today’s visitor to the site will see that the chapel has been built over the tombstones in such a way that they are still exposed to the elements and, until the 1960s, were accessible to the public. 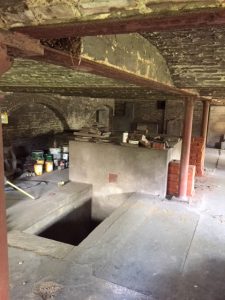 In the long run, time, tide, the elements and its use by what used to be called tramps threatened the physical integrity of the tomb and the five very precious coffins it held. And so, in 1961 they were transferred to the crypt in St Michael’s – the ecclesiastical term is `translated’ – in a major ceremony where again the Bishop of London officiated.

Not only that: members of the Coleridge family attended too; the poet Laureate John Masefield gave an address, hundreds of boys from Highgate School, girls from Channing and members of the Highgate community, and far beyond, crammed St Michael’s in an outpouring of love and respect for one of our greatest poets and thinkers.

The celebrities of the day, too, turned out to witness the translation. T S Eliot; Agatha Christie, Harold Pinter’s wife-to-be Antonia Fraser, while the poet laureate John Masefield gave the main address from the pulpit dressed, it was said, in some rather unfashionable, well-worn carpet slippers! The then owners of number 3 The Grove who were members of the St Michael’s congregation invited Masefield and some of the more important guests across to the house for a reception immediate following the ceremony. 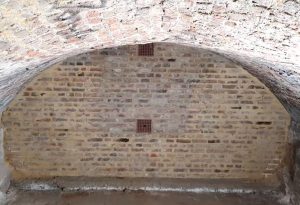 We don’t know if the coffins were moved that day, or whether they were removed earlier. There are reports that some of them had to be repaired although, so far as is known, the remains rest in the original 19th century coffins. Whatever the story, they were reinterred at the back of a sloping wine cellar belonging to the house that had originally stood on the site, bricked up and left. 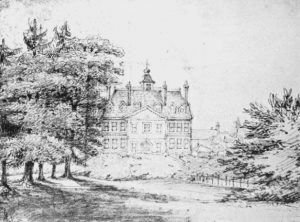 A word about the house and cellar. Ashhurst House had been built in 1694 at roughly the same time as the row of beautiful 17th century dwellings that line the Grove, opposite, where Samuel was both to live and die. It was built for a former Lord Mayor of London, Sir William Ashhurst and was demolished in the early 1830s to make way for the present St Michael’s church. Interestingly, during the course of the demolition a labourer by the name of Charles Day was half buried in falling rubble dislodged by an ill-used pickaxe and was taken across the way to 3 The grove and tended by Dr James Gillman – STC’s landlord, friend and protector. Mr Day’s recovery was expected and, according to a contemporary diarist “Mr Gillman sat up all night with him; & had attended every day, save that one, in apprehension that an accident might happen.” 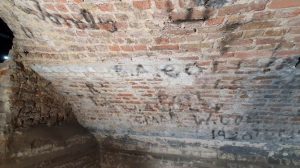 The wine cellar is lobster shaped. The coffins rest in the tail amidst dust, old brickwork and rubbish, and lie behind a wall made up of what is clearly new brick. There are two air vents, one near the top, the other near the ground, through which with the aid of a slim torch, the coffins can be dimly seen. The rest of the cellar is rubble-strewn. Covering the walls are black hieroglyphs which look like letters but which are undecipherable as such. Someone thought they might have been scrawled there by disaffected choir boys using the blackened stubs of their candles. But, who knows? 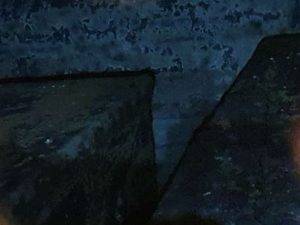 The coffins have rested there ever since that June 1961 ceremony Time has moved on: Highgate people have left the scene, moved on as well, memories dimmed… Even recently it wasn’t certain where the entombment had taken place. The original people responsible for the reinterment clearly indicated that the final resting place was below the marble, inscribed stone in the centre aisle. Other respected church authorities were just as firmly convinced that they were bricked up in a shallow area in the deep south western corner of the nave, just below the font. 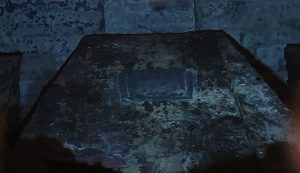 It wasn’t until a hands-on excavation into what is, by any account a rather dangerous, area of the church was carried out that the truth emerged: Covered in dust and barely distinguishable from the rubble in which they lie, the five coffins repose.

Neither the wine cellar, the tomb-area itself nor the crypt in its entirety are fit for the purpose entrusted to us of caring for the remains of this great poet and his family in a proper and fitting way. And, on June 2nd 2018, very much at the initiative of new incumbent Rev. Kunle Ayodeji, the decision was taken to redress the balance: to launch a campaign to raise the substantial amount of money needed to refurbish the entire area both as a fitting tribute to the man and his place in Highgate’s and national and international history, and as a resource centre for the use of our own and the wider north London community.

The campaign was launched holding a special event which included two lectures from noted academics; the attendance of some 39 members of the Coleridge family, and a musical tribute specially written for the occasion by St Michael’s director of music Paul Dean, based on four of Coleridge’s lines:

One kiss, dear maid! I said and sighed,

Your scorn the little boon denied.

Ah why refuse the blameless bliss?

Can danger lurk within a kiss?

A tour of the village was included taking in the original tomb at Highgate School; Number 3 The Grove as well as the Coleridge room at the Highgate Literary and Scientific Institution. Some guests paused at the spot, close by the original chemist that supplied the poet his laudanum, where he stood and talked endlessly to a companion as the cortege bearing Lord Byron’s coffin passed on its way to his Nottinghamshire grave. His great great great great grandson, Adam Martin, played a Bach prelude and fugue.

Thus, working closely with the Friends of Coleridge, The Highgate Scientific and Literary Institution, members of the Coleridge family and Highgate we were able to construct a programme to do justice to Samuel Taylor Coleridge and his place in our history and culture, and to a certain extent pay tribute to that original event, now 60 years ago, when the coffins were solemnly translated from their resting place where Highgate Hill doglegs into North Hill. Imagine, the scene and the procession..!

Eleven days before he died Sam Coleridge wrote a letter to his godson Adam concerning his faith. It was read at his funeral by the Revd Samuel Mence, the incumbent who performed the ceremony. And read once again in June 1961 at the translation.

It concludes: “Eminently blessed are they who begin early to seek, fear, and love their God, trusting wholly in the righteousness and mediation of their Lord, Redeemer, Saviour and everlasting High Priest Jesus Christ. O, preserve this as a legacy and bequest from your unseen Godfather and friend…”

With your help we will be able to help preserve Samuel Taylor Coleridge’s wider legacy and bequest, both to his church, his village and the world beyond.