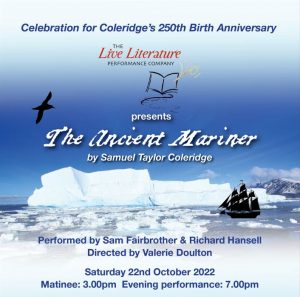 NOT FEET AWAY from where Samuel Taylor Coleridge and his family are buried, a modern reinterpretation and re-enactment of his most famous poem is to be performed to celebrate 250 years of the poet’s birth.

On Saturday October 22nd St Michael’s church in Highgate, North London, will host two performances of adaptations of The Rime of the Ancient Mariner. one of the most popular and famous poems in the English Language. One at 3.00 pm and one at 7.00 pm.

Will we hear again the immortal lines:

He prayeth best, who loveth best All things both great and small; For the dear God who loveth us, He made and loveth all.”?

We will learn more on the day!

Valerie Doulton, director of The Live Literature Company reimagines this marvellous poem, written by one of our greatest geniuses, through slightly different eyes…

“It is particularly moving that we are able to perform this work in the very church where Coleridge worshipped and in whose crypt he and his remarkable family were reinterred in June 1961. Our thanks to the Rev Kunle Ayodeji, vicar of St Michael’s, for helping with this venture, and to The Coleridge Trust* for its support.”

The dramatisation stars actors Richard Hansell (‘The 47th’ The Old Vic Theatre, London, ‘The View from the Bridge’, West End/ Broadway) and Sam Fairbrother (recently in LLC’s William Blake at Tate Britain). The production is suitable for people of all ages.

* 17th October: STATUE TO BE RAISED TO SAMUEL TAYLOR COLERIDGE     “EVERY INCH A GENIUS”

A LIFE-SIZED STATUE of one of our greatest poet/philosophers is due to be unveiled this week outside the church where he was baptised and within yards of the spot where he was born. Such is its importance, it is one of the first statues to be erected in a Church of England churchyard for over a hundred years.

The likeness of Samuel Taylor Coleridge will be shown to the public for the first time this coming Friday October 21st at 11.00 am precisely mirroring the date and time of his birth 250 years ago in 1772. The poet is poised, standing, notebook in hand, staring from the churchyard of St Mary’s Ottery in Devon directly at the site of the schoolhouse where he was born. 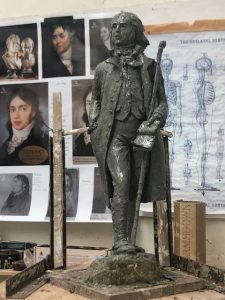 Lord Coleridge will be present at the unveiling as will many of the poet’s descendants; academics from the literary world, and residents of the poet’s home town.

According to Dr John Pilsworth, Vice chairman and founding member of the Coleridge Memorial Trust (CMT): “this is singularly the greatest tribute that we of this generation can possibly give to the poet Samuel Taylor Coleridge – a man ahead of his time, a wayward man troubled with personal problems, but every inch a genius.”

“Coleridge was the author of The Ancient Mariner, Kubla Khan, and  Christabel which remain among the greatest poems in our language. He also produced some of the most thought-provoking essays and lectures on logic, philosophy and theology. With his friend William Wordsworth he launched the English Romantic Movement with Lyrical Ballads in 1798.

“It is absolutely right and fitting that this man should at last be coming home. Coming back to the town where he was born. To stand next to the church where his father, who was the local minister, baptised him. It was here, in this churchyard, that he spent so many formative hours alone with his thoughts and books. And it was here where his amazing imagination was nurtured. He would have felt as proud of this moment as we who are here in person feel proud.”

The Right Hon. The Lord Coleridge, 5th Baron of Ottery St Mary said: “it has taken the work of many people to bring about this momentous contribution to the reputation and stature of Samuel Taylor Coleridge. Members of the Coleridge family have helped considerably, as have innumerable lovers of his poetry and philosophy both here in Ottery St Mary and farther afield.

“At last we have a focus, in this town, of the poet’s birth for all those who have been touched by the greatness of the man we commemorate today. My thanks to all those who have contributed, particularly to members of the Coleridge Memorial Trust who have put so much effort, over so many years, into turning yesterday’s dream into today’s truly magnificent reality.” 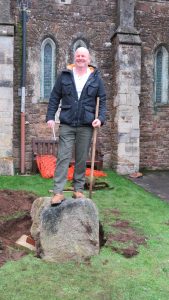 Richard Coleridge, the poet’s great great great great grandson and secretary to the CMT said that “today is the culmination of much very hard work done by so very many dedicated people over such a long period of time. My forebear would have been as pleased and proud as all his descendants are who have been kind enough to support this cause.

“It’s an understatement to say that it will be eerie, standing so close to where he will have played, thought, read and wrote his own stories. The cemetery at St Mary’s Ottery is filled with his wider family. And it’s so pleasing to know that so many of the living will come back to pay their respects to the dead.

“It’s STC as well who is coming home, to the home that he loved and the town that nurtured him in return. On behalf of the Coleridge family I’d like to thank everyone who has helped create this tribute to one of the most remarkable men of his, and any other, age.” 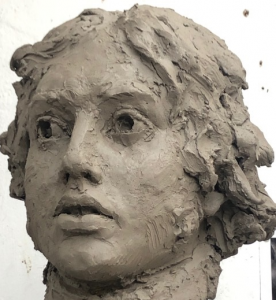 The life-size clay sculpture has been sculpted by Nicholas Dimbleby and cast into bronze to stand on a granite boulder. According to Dimbleby: “Coleridge was the greatest poetic companion to have in my studio. Loquacious, energetic, humorous and so stylish in his 18th century costume. My sculpture imagines him pausing on one of his many long walks in Somerset, with his portrait head modelled from three or four paintings made from the 1790s.”

* 13th June: Over 200 visitors came to St Michael’s Church in Highgate last Saturday afternoon to pay their respects to Samuel Taylor Coleridge and his family – Sarah his wife; Sara his daughter; his son in law Henry, and grandson Herbert. The vault where he lies was opened as part of Highgate Village’s Fair on the Square celebration. They were led to the wine cellar where the family are interred beneath the church in groups of between 12 and 15 after hearing a brief introduction from The Coleridge Trust secretary Drew Clode. They were also able to read some exhibition boards prepared for the Trust by Terry Sackett and Ian Enters from the Friends of Coleridge. Once there they were given further information about the cellar from TCT chair Alan West. Actor Kenneth Michaels recited the poet’s famous self-written obituary – Stop Christian passer by… and while they were leaving the cellar they listened to a recording of a verse from Coleridge’s poem The Kiss set to music by St Michael’s director of music Paul Dean. One American visitor described the experience of hearing Coleridge’s obituary not two yards from the poet’s resting place as `spine-tingling’. All who were asked said they’d thoroughly enjoyed the visit and the recitals. Pamphlets detailing the poet’s arrival in Highgate in 1816; his life there; the works he undertook and his fight against laudanum addiction were freely available and taken away. Others described his move with his benefactors the Gillman family to number 3 the Grove where he was to die in July 1834. Buried originally in the village cemetery, he and his family were re-interred in St Michael’s church vault in June 1961. There are no plans to open the vault to the public in the near future, though it is hoped to be able to repeat the opening at next year’s fair.

* 6th June: THE GATES TO ST MICHAEL’S CHURCH CRYPT in Highgate North London will be flung open on Saturday June 11th so that, for the first time members of the public can visit its hidden 17th Century wine cellar where the poet Samuel Taylor Coleridge lies buried. The event, to coincide with the village’s famous Fair in the Square, will be to help draw attention to the sorry state in which the coffins of the author of The Ancient Mariner and four members of his family lie. Viewing commences at noon and will continue until 4pm.

* TWO ITEMS FROM the Trust figure prominently in the Friends of Coleridge (https://www.friendsofcoleridge.com/) publications recently. In their main twice-yearly bulletin (Winter 2021) there is a long article from Trust secretary Drew Clode briefly details STC’s life and death in Highgate, Then gives an almost blow-by-blow account of the process whereby the coffins of the Coleridge family were `rediscovered’ in the famous wine cellar beneath the village parish church of St Michael’s Church. This was accomplished by the author and church official Alan West in February 2018. From there on the history of the Trust developed.

* LAST MONTH SAW the Trust exhibiting at the local Highgate Village forum held annually at, and organised by, Lauderdale House. About 20 local charities and volunteers groups set up their stalls packed with information about their particular enterprises to a wide variety of the public who came to learn. Earlier representatives of the charities had an information-swap session where they kept each other up to date with what was happening in their organisation and in the wider community. TCT was represented by chair Alan West and trustee Malcolm Macgregor and the stall, with its model of the church and crypt drew a lot of attention. Boards describing the poet’s life in Highgate, kindly designed and produced by the Friends, surrounded our table and were widely appreciated.

* A MEETING BETWEEN trustees and members of the Highgate Cemetery looked speculatively at ways in which TCT and Cemetery might work together in the future.  The original linkage of the two sites (the western cemetery once formed the grounds of the rather stately home, Ashhurst House, that stood on the site pre-St Michael’s Church) was sealed off over a century ago. Before that St Michael’s had served as the chapel where funeral services were held prior to burial.

* THE TRUST IS planning a programme of works and visits which hopefully will take place at the beginning and during the Highgate Village Festival  which kicks off with the renowned Fair in the Square on June 11th this year.

* A PERMANENT MEMORIAL to Samuel Taylor Coleridge and his family, who are buried in the cellar below St Michael’s Church Highgate in North London, is being planned to sit in the nave. The tribute will include a full scale model of the poet as well as information boards and leaflets describing and explaining his life and times in Highgate. TCT Chair Alan West said: “The wonderful light shown by this poet and his family has been hidden under a bushel for far too long both in the church and the village. We hope this modest display will complement the magnificent tributes to him on the walls and on the famous memorial stone bearing the poet’s self-epitaph in the main aisle.”